“The results of last year’s survey demonstrate that we are not just continuing the visitation and visitor spending growth we have delivered over the past seven years, but we have now posted historic highs in both categories. These achievements are the result of a strategy that attracts a combination of carefully targeted convention business and leisure travelers through tactics which leverage paid media, earned public relations exposure and special events to market New Orleans to the world. As the state continues to grapple with budget deficits, the New Orleans tourism industry grows ever stronger, adding to our economy much needed jobs and tax revenues,” said Stephen Perry, President and CEO of the New Orleans Convention and Visitors Bureau.

“The New Orleans tourism industry experienced yet another breakthrough year in 2016, this time making history for the number of visitors to our city and visitor spending,” said Mayor Mitch Landrieu. “This exciting achievement is a testament to our city’s unique ability to host tourists and major events like no other. As we approach our tricentennial, I look forward to 2017 being an even bigger year for the tourism industry in New Orleans.”

“Our marketing strategy, aimed at attracting the leisure travelers, continues to provide dividends to our economy,” said Mark Romig, President and CEO of the New Orleans Tourism Marketing Corporation. “Going into 2017, we continue to work side by side with our industry partners, especially the Louis Armstrong New Orleans International Airport, the New Orleans CVB and the Greater New Orleans Hotel & Lodging Association, to reach as many potential visitors as possible with our creative messaging.”

“Our analysis of the research results shows that New Orleans over the past several years has dramatically increased the quality of the foundational pillars necessary for a top tourism destination. Potential visitors and repeat visitors have become increasingly aware of the unique and elevated visitor experience that is a result of New Orleans’ exquisite restaurants, lavish hotels, sporting events, convention center, varied and numerous festivals, museums, and other attractions,” said Dr. John Williams, Dean of the College of Business Administration at the University of New Orleans. “This combination of attributes provides an extremely strong competitive edge as New Orleans sets new benchmarks for tourism visitation and spending.”

In 2004, New Orleans welcomed 10.1 million visitors, who spent $4.9 billion while in the city. In 2006, after Hurricane Katrina, visitation dropped to 3.7 million, with $2.9 billion in visitor spending. Due to the efforts of the NOCVB and NOTMC, visitor numbers and spending have steadily increased since Katrina, and the total number of visitors in 2016 surpassed the record visitation numbers set in 2004. Since 2010, visitation and spending in New Orleans have increased by nearly 26 percent and 40 percent respectively. In addition to the record-breaking increase in visitation, visitor spending in 2016 was $7.41 billion, a 51 percent increase since 2004.

The cumulative 5.1 percent increase in spending activity from 2015 was felt in all categories:

Most visitors (28.5 percent) traveled to New Orleans during the second quarter of 2016, which can be related to Jazz Fest, French Quarter Fest, and conventions. The primary purpose of their visit remained similar to what it has been over the last six years:

The research also found the following: 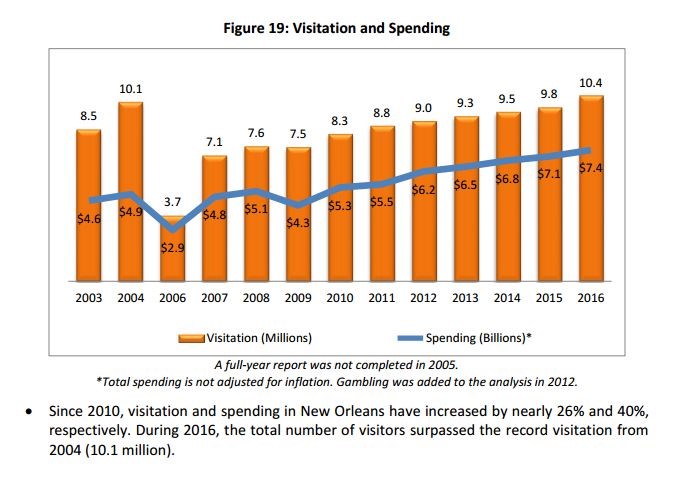 This is the final year for using the UNO Hospitality Research Center's survey as the NOCVB and NOTMC transition to a visitor count process administered by DK Shifflet & Associates (DKS) for 2017’s research. There are a few reasons for this change - First, the Louisiana Office of Tourism office has already moved to DKS for its tourism research. As the state reports statewide visitation data, we should be in sync with their data and process. Secondly, many of the states and cities with whom we compete for visitors also use DKS. Using the same data will provide a clear comparison of our visitation and visitor spending results versus our competitors’. We have informally monitored DKS results for New Orleans for the last few years. Their methodology will provide us a comprehensive count for our visitors and visitor spending which will include the all-important “day-trippers” who come into the city for an event, attraction or meals but do not remain overnight. We plan to continue working with UNO on other survey projects including employment and salary surveys for the industry.

Other tourism organizations who use DKS for their tourism research:

The University of New Orleans Hospitality Research Center is a collaborative effort of the Division of Business and Economic Research (DBER) and the School of Hotel, Restaurant and Tourism Administration (HRT). Principally known for its economic analysis and forecasts, the DBER has also conducted research studies such as visitor profiles, forecast of tourism indicators, customer satisfaction surveys and analysis of casino gambling impacts. Each faculty member of the School of HRT has broad experience in the tourism and hospitality industry and has extensive academic preparation. Working together, in cooperation with the professionals in the Division of Business and Economic Research, the UNO Hospitality Research Center is a Center of Excellence and consistently recognized for research productivity in the hospitality field. The function of the Hospitality Research Center is to provide a variety of research services to hospitality, travel and tourism organizations. For more information, please visit www.uno.edu/coba/DBER.

New Orleans Tourism Marketing Corporation (NOTMC) serves as the City of New Orleans' leisure travel promotion agency. NOTMC is a private economic development corporation created under Louisiana State Law to foster jobs and economic growth by developing the tourism industry in New Orleans. The mission of the New Orleans Tourism Marketing Corporation is to promote and position New Orleans as the number one leisure tourism destination through a broad program of advertising, public relations, social media, Internet marketing, promotions, research, and other marketing strategies. These strategies are designed to maintain and improve the city's image as a great place to visit, to attract increased numbers of travelers, and to increase tourist spending in New Orleans. Please visit www.neworleansonline.com for more information.

The New Orleans Convention & Visitors Bureau (NOCVB) is a nationally accredited, 1,100-member destination marketing organization and the largest and most successful private economic development corporation in Louisiana. The CVB and its members influence thousands of decision-makers and millions of visitors to choose New Orleans through direct sales, marketing, public relations, branding and visitor services at our New Orleans headquarters and offices in Chicago, Louisville, KY, Washington, D.C., the United Kingdom, France, Germany, Canada, Brazil and China. Consistently recognized as one of the top five CVBs in the country, the New Orleans CVB celebrates its 57th anniversary in 2017. For more information, please visit www.neworleanscvb.com; www.facebook.com/neworleans: www.twitter.com/visitneworleans.